The Impact of Turkish Goods on the Armenian market

During the war unleashed against Artsakh by Azerbaijan on September 27, Turkey openly provided military and political assistance to Azerbaijan. In the light of growing discontent in Armenia on this occasion, the Armenian government decided to ban the import of goods of Turkish origin to Armenia for six months starting from January 1, 2021. Although according to the EAEU Treaty the ban on goods imported from third countries can be for a maximum of 6 months, it is assumed that after the end of the term it will be extended.

This decision, although welcomed by the general public, raised a number of questions, the answers to which are still unknown.

In particular, the most important issue is the replacement of cheap Turkish goods, the solution of which is still uncertain.

Let us have a look at the role Turkey and Turkish goods actually play in the Armenian market. For this purpose, we will study the statistics of Turkish goods imported to Armenia in the last 20 years.

By the way, the specific weight of goods of Turkish origin is more than the goods imported from Turkey.

As mentioned, before 2005 the specific weight of goods imported from Turkey was quite small – 38-40 million dollars, but since 2005 the import of Turkish goods has increased sharply and in 2008 it reached its historical maximum – 268 million dollars. A similar index was recorded last year as well.

The graph shows that in 2009-2015 the import of Turkish goods experienced a sharp decline.

In the first case, the reason was the global economic crisis, as a result of which the Armenian economy recorded a decline of more than 14%, and the volume of imported goods subsequently experienced a 25% decline.

The decrease in the import of Turkish goods in 2015 was again linked to other factors. This time the main reason was the devaluation of the Russian ruble. As we know, the domestic economy is highly dependent on the Russian market, and simultaneous with the decrease in the purchasing power of the latter, the export from Armenia to Russia also decreases. In addition to the decrease in inflows to the country, there is also a decrease in remittances. Private remittances from Russia decreased by about half a billion dollars, which led to a decline in the purchasing power of our country, as a result of which the volume of imports to Armenia decreased by 26-5%. This naturally affected the Turkish imported goods.

In general, the share of goods of Turkish origin imported to Armenia is quite large, especially taking into account that Armenia and Turkey have not even established diplomatic relations.

As for this year, the Statistical Committee has published data for October of this year according to which goods worth of $ 178 million of Turkish origin were imported to Armenia in the first 10 months of 2020, which makes up the 4-9% of imports. Compared to the same period last year, this figure has decreased by $ 32 million. 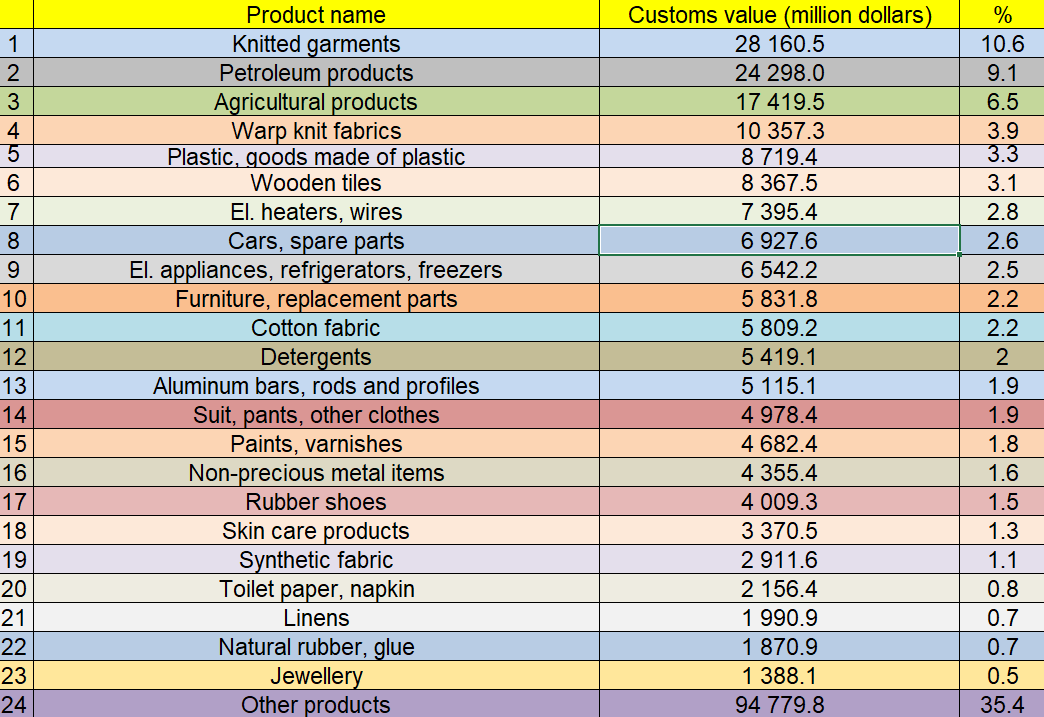 These are cheaper than the products of other countries due to which they are quite competitive in our country. That is why the decision of the government to ban their import to Armenia raises several issues which have two alternatives solutions: import from other countries or organization of local production.

In order to organize the import process from other countries, the economic entities engaged in the import of Turkish goods have a very short time to search for other available sources, establish business relations with them, organize the import process, and so on. In addition, Turkish goods in Armenia were competitively priced due to transportation costs, which is quite problematic in the case of goods imported from distant countries due to their geographical location.

Promoting local production is one of the solutions to this problem. Of course, many of these products have Armenian substitutes, such as detergents and other chemicals, fruits and vegetables, textiles, etc. but the costs of purchasing raw materials or organizing production are often higher than in the case of Turkish products which generates problems for producers in terms of sales, and for citizens with low purchasing power in terms of consumption.

To resolve this issue serious state support should be in place to organize production in Armenia at the lowest possible cost (import of raw materials, temporary exemption or reduction of taxes, introduction of the latest technologies, etc.).

To sum up, this decision of the government will place the importers of Turkish goods in a difficult situation considering also the severe consequences of the coronavirus and the war. However, it can be stated that in case this issue is resolved, the domestic economy will be completely liberated from economic dependence on a non-friendly country.