The position of the Armenian authorities on the presidential elections in Belarus on August 9, 2020, and post-election developments has become the subject of criticism. Although the position is presented as an expression of national interest, it is not quite so.

The presidential election in Belarus was held amid widespread pressure on the opposition and the arrest of opposition leaders. Contrary to all independent exit polls, Alexander Lukashenko, who has ruled Belarus for more than two decades, has allegedly won nearly 80 percent of the vote, according to the Central Election Commission of Belarus.

Since evening of August 9, 2020, the citizens of Belarus have been continuing mass protests in different cities of the country. In response, the authorities use force, persecute opposition figures and impose various restrictions. During the peaceful demonstrations, as a result of police actions, a number of protesters were killed, many people have been missing, while the media and human rights organizations report inhumane torture of protesters detained in Belarus.

A number of countries and organizations around the world have refused to recognize the legitimacy of the elections in Belarus, citing widespread human rights violations in that country.

However, Armenia, along with several other countries in the Eurasian region, recognized the results of the presidential election in Belarus, and on August 10, 2020, Prime Minister Nikol Pashinyan congratulated Alexander Lukashenko on his “election” as president.

Criticism and segregation of countries

Pashinyan’s congratulations to Lukashenko was sharply criticized by forces that are advocates of democracy in Armenia. In particular, at the heart of the criticism was the fact that the political team that came to power in Armenia after the 2018 revolution, declared its commitment to democratic values and the supremacy of those values, and even formulated it in the National Security Strategy. However, in the case of Belarus, in fact, it refrains from speaking out about those values.

Against the background of such criticisms, during a question-and-answer session with the government in the National Assembly on September 16, 2020, Karen Simonyan, a member of the “Bright Armenia” faction, asked Pashinyan why Armenia abstained from voting to convene a session of the UN Human Rights Council to address the human rights violations in Belarus. Simonyan also listed a number of countries that abstained from voting on the initiative as well, including Angola, Cameroon, Congo, Nigeria and other countries.

When asked by the Prime Minister whether the deputy hinted at a certain “segregation” of countries, listing the names of specifically the mentioned countries, Simonyan gave a negative answer, nevertheless, the analysis of the votes of the countries participating in the voting can become a basis for certain conclusions.

The countries that abstained along with Armenia, according to the international human rights organization Freedom House, have the following coefficients of freedom: 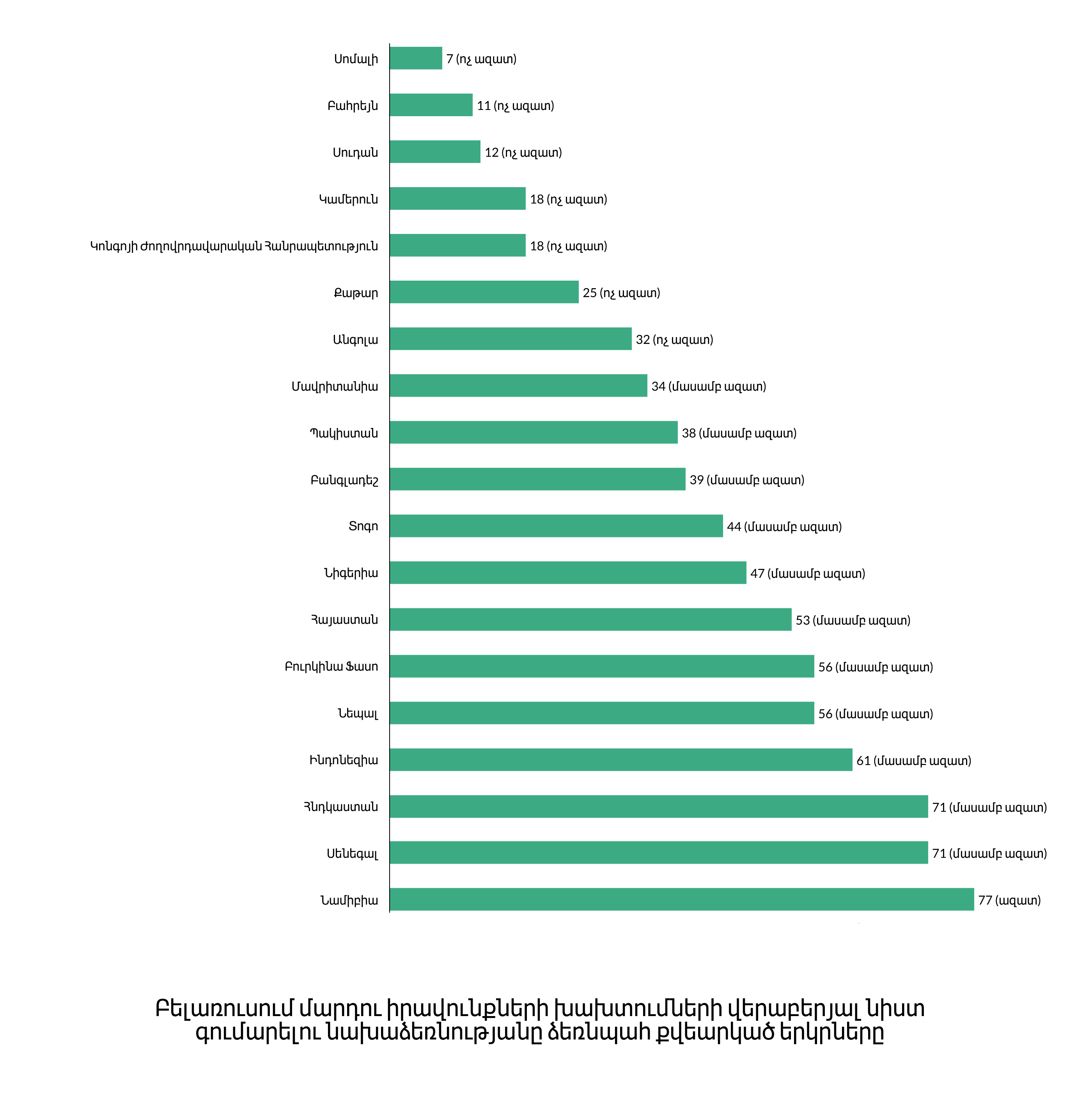 The two countries that voted against the initiative are the Philippines (59, partially free) and Venezuela (16, not free). As shown in the statistics above, the results of the UN Human Rights Council vote on convening a special session for addressing the human rights violations in Belarus, have a certain pattern.

In particular, among the 25 countries that voted for convening a session, with the exception of four countries, the rest are classified as so-called free and democratic countries.

Meanwhile, in the list of countries that abstained from the initiative, the exceptions are the two countries that are classified as free, the majority are partially free or not free states, including Armenia.

The dissonance of the national interest

In response to the NA MP’s question, the Prime Minister of Armenia also noted that the voting decision was made in combination of different principles.

“Armenia does not have interests and principles of only one direction or one side. Such a position has been adopted in combination of those principles”, -said the Prime Minister adding that , following the 2018 revolution, their team announced that the revolution was an internal process of Armenia and they had no intention of exporting or importing it.

Nevertheless, leaving aside the expressions “export” or “import” of the revolution, it should be emphasized that according to the newly adopted strategy of national security of Armenia, Armenia defines the creation of a more favorable external environment as the national interest of the Republic of Armenia.

In particular, the strategy states (4.5) that ” Armenia views democracy and the protection of fundamental human rights and freedoms as key components of peace and stability in the region and will continue to support the establishment of these values.”

Consequently, what region exactly is mentioned in the National Security Strategy?

Armenia is not connected with neighboring countries through any active integration program, while Armenia’s economic and security “region” is the Eurasian region, in particular, the borders of the Collective Security Treaty Organization (CSTO) and the Eurasian Economic Union (EEU).

Therefore, democracy and the protection of fundamental human rights and freedoms, are also important components of peace and stability in the region, and Armenia, according to its National Security Strategy, must continue to support the establishment of these values in that region as well.

The difference between the EU and the EEU

It is interesting that when answering the question about Belarus, Nikol Pashinyan stressed that the mentioned country, just like Armenia, is a member of the EEU.

In general, the comment that Armenia should or had to recognize the legitimacy of the problematic elections in Belarus, since it is a member of the same integration units – the EEU and the CSTO, is quite common, but inappropriate.

A vivid example of this is the European Union (EU), the bodies of which do not shy away from pointing out the problems related to democracy in some EU member states.

For example, in March 2017, the EU condemned the actions that were against the protection of human rights in Hungary and called for an investigation into the human rights situation in that country.

In fact, in this case we are talking about the difference between the values adopted by the integration structures – the values of the EU on one hand and those of the Eurasian structures EEU and the CSTO on the other hand.

In case of the first structure, the very democratic values are the cornerstone, therefore regardless of where the problems related to those values are registered, a proper reaction follows.

In the case of Eurasian structures, the situation is different: there is a certain division between “ours” and “not ours”, and between the so called group of “ours”, personal relations and solidarity between the leaders of the countries play an important role among a number of other factors.

This, of course, has a negative impact on the efficiency and quality of the management model of Eurasian structures, and it is here that Armenia, in the spirit of its National Security Strategy, should continue to support the strengthening of democratic values in this region as well.