Armenia’s commodity structure of exports in 2020 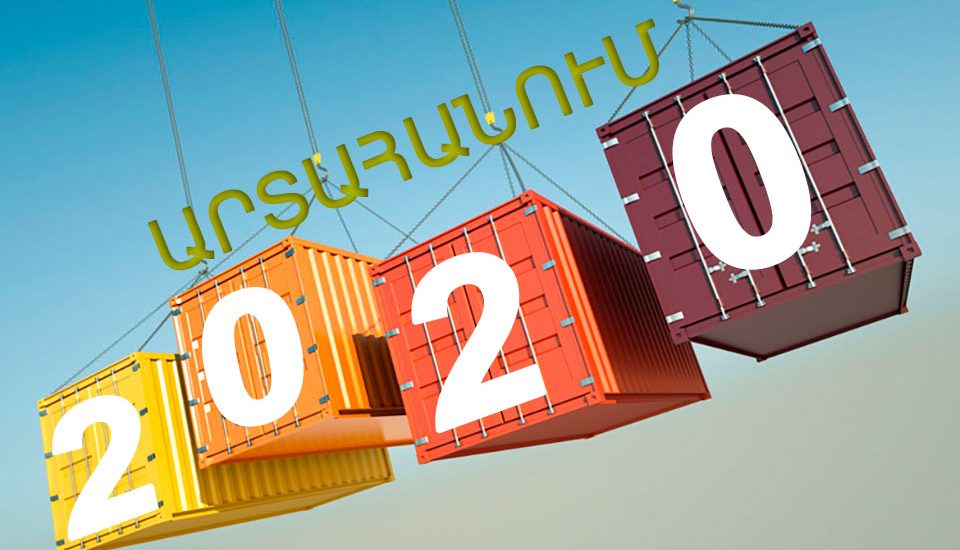 Last year was a shock for the world economy, as the coronavirus pandemic forced almost all countries to impose economic restrictions, which in turn had a negative impact on economic growth.

The economic crisis affected the Armenian economy too. Last year, Armenia’s foreign trade turnover amounted to only USD 7.1 billion, which was 13․2% or USD 1․1 billion less compared to 2019. Against this background, exports fell by 3.9%. In 2019 goods worth USD 2 billion 649 million were exported from Armenia, while last year exports amounted to USD 2 billion 544 million.

The growth of export volumes registered at the beginning of the previous year was slowed down by the coronavirus, then by the war, which led to decline in exports by 3.9% as compared to the previous year.

As we can see, in almost all months of last year (except for January, June, September and December), exports from Armenia were less compared to 2019. It is mostly visible in March, April and November. This can be explained by the economic restrictions caused by the coronavirus, and by the war.

As in previous years, in 2020 the most exported commodity group was mineral commodities, which, in contrast to other commodity groups, recorded 11.5 percent growth in exports.

Exports of commodities of plant origin, animals and commodities of animal origin registered a significant increase. Compared to 2019, the export of these commodity groups increased by 27․3% and 52․7%, respectively.

Shares of commodity groups exported from Armenia last year are given below:

In terms of geographical directions of commodities exported from Armenia, there does not seem to be any change in 2020, but in terms of volume, the changes are apparent.

EU member states are mainly interested in copper, molybdenum, zinc concentrate, aluminum foil, as well as ferro-molybdenum and clothes made in Armenia.

Naturally, the lion’s share of goods exported from Armenia to the EAEU member states goes to the Russian Federation. However, the volume of exports to Russia has also decreased. Compared to 2019, last year $ 676 million worth of commodities were exported to this country, which is 95.9% of the goods exported to the EAEU.

Unlike EU countries, the range of goods exported to the EAEU is much more diverse. Fresh-canned fish, dairy products, vegetables, fruits, sweets, alcoholic beverages, clothes and knitwear, as well as stone tiles, vehicle spare parts, medicines, and etc. are exported in this direction.

In contrast to the reduction in the volume of goods exported to the EU and EAEU member states, last year the export of Armenian commodities to other countries increased slightly. In contrast to 2019, when goods worth about USD 1 billion 400 million (49․2% of exports) were exported from Armenia to other countries, last year commodities worth USD 1 billion 410 million were exported to these countries, which is 55․4% of the total exports. Under the circumstances of such a small increase in volume, the sharp increase in the share of total exports is due to the reduction in total exports.

As we mentioned, exports from Armenia to these countries have increased, with the exception of Iraq, Georgia and Canada. However, the decline in exports to Canada deserves special attention. In 2019, compared to 2018, export of goods to Canada almost doubled, but last year it decreased by about 95%. This country was interested in the copper concentrate and diamond sold by Armenia.

In contrast to Canada, the volume of exports to the United Arab Emirates, China and the United States increased sharply by 67, 49.7 and 25.9 percent, respectively.