Recently different media publications claimed that Russian President Vladimir Putin has signed a decree on replenishing the 102nd Russian Military Base in Armenia with 7000 troops and heavy military equipment.

Moreover, EurAsiaDaily, the source website of the news item, continues disseminating that news on Facebook through a paid advertising service till today presenting that information as reality. 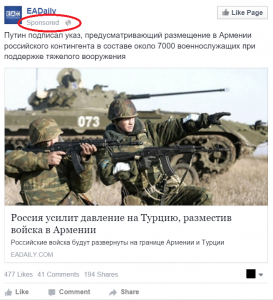 And though a week has already passed since the publication of that material, it has not been confirmed in any way, there is no information about such a decree in Kremlin’s official website, and only 6 Russian helicopters have been brought to Armenia.

Thus, “Union of Informed Citizens” NGO tried to track that publication and check its originality.

So, citing the Lebanese Al Mayadeen TV “source”, EADaily informs that 7000 troops will be dispatched in Armenia by Vladimir Putin’s decree and “will closely cooperate with the Russian military base in Syrian Latakia”. Moreover, it is not mentioned how the troops “to be dispatched” in Armenia are going to cooperate with Russian troops in Syria.

If we do Google search in Armenian, Russian, Turkish and Arabic on the internet, it becomes clear that the material was first published in other websites citing the latter. And as we have already mentioned, EADaily had cited the “source” of Lebanese Al Mayadeen TV.

And though that news item would be important for media in case of being a little close to reality, it cannot be found in any of the Russian leading media (which often have real sources close to Kremlin).

Hence, it is difficult to say what source a Lebanese TV channel could have in Kremlin, one that even the Russian leading media do not have. In other words, we can claim that either the Lebanese Al Mayadeen has not had such a publication, or it has been invented.

And though it is EADaily that spares no effort and money to disseminate that material in Armenia (and we are sure it realizes that it is a misinformation), we cannot exclude that the information comes from Al Mayadeen (it was not possible to find it out).

The point is that according to Lebanese independent sources, Al Mayadeen (with pan-Arabic coverage) belongs to Syrian President Bashar al-Assad’s nephew, businessman Rami Mahluf. Mahluf is quite famous in the Arab world and his possessions are estimated to exceed 5 billion USD.

And though the channel’s leadership refuses to name its owner, it is mentioned that the latter is an “Arab businessman”.

Studies claim that apart from Assad’s team, Al Mayadeen is also funded by other members of Shia-Muslims “faction”, such as “Hezbollah” group, which operates in Lebanon and is very influential, and Iran.

In particular, the cause of that funding by the Shiite is to counterbalance Al Jazeera, Saudi Al Arabiya with Sunni-Muslim orientation, Western Sky News Arabia, and BBC Arabic Television TV channels.

Anyway, it is clear that Al Mayadeen TV channel, which belongs to Bashar al-Assad’s nephew and supports Shia-Muslims, may have publications in which they may try to show that Russia also supports them in the fight against Sunni-Muslim Turkey… And this support may include supposedly “oppressing” Turkey through their troops in Armenia.

But the problematic aspect is that the publication enters the Armenian media field through the Russian website EurAsia Daily and starts to cause large-scale misinformation. 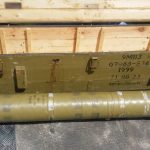 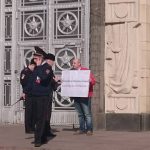