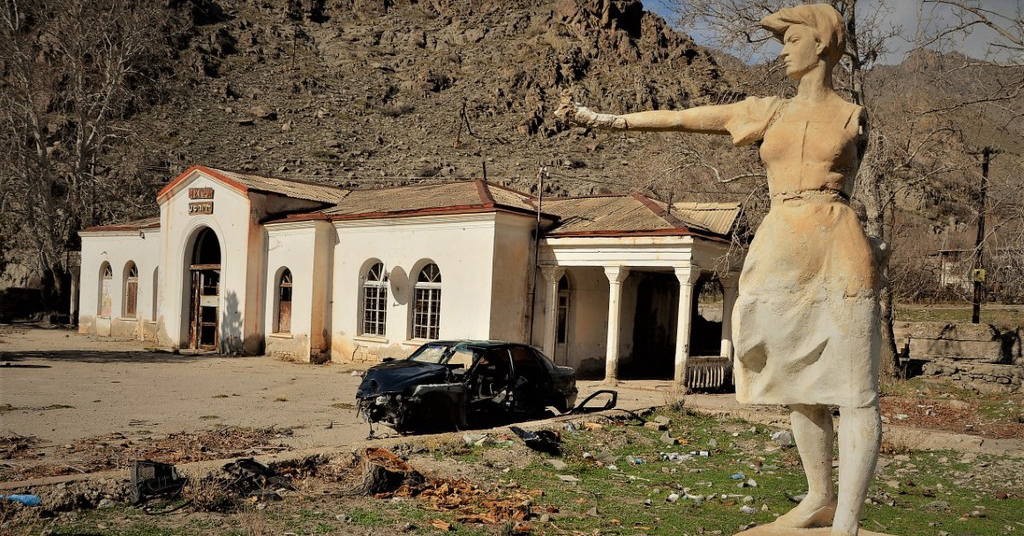 The end of the last war in Artsakh was given by the trilateral statement of the leaders of Armenia, Russia and Azerbaijan, signed on November 9, 2020. The Point 9 of the statement stipulates: “All economic and transport links in the region shall be unblocked.” Two months later, according to the second trilateral statement of the leaders of the three countries adopted on January 11, 2021, a trilateral working group was set up, the priorities of which are rail-road communications.

After the second trilateral announcement, the Russian “Kommersant” newspaper published a map depicting the possible unblocking of the transport links in the region. 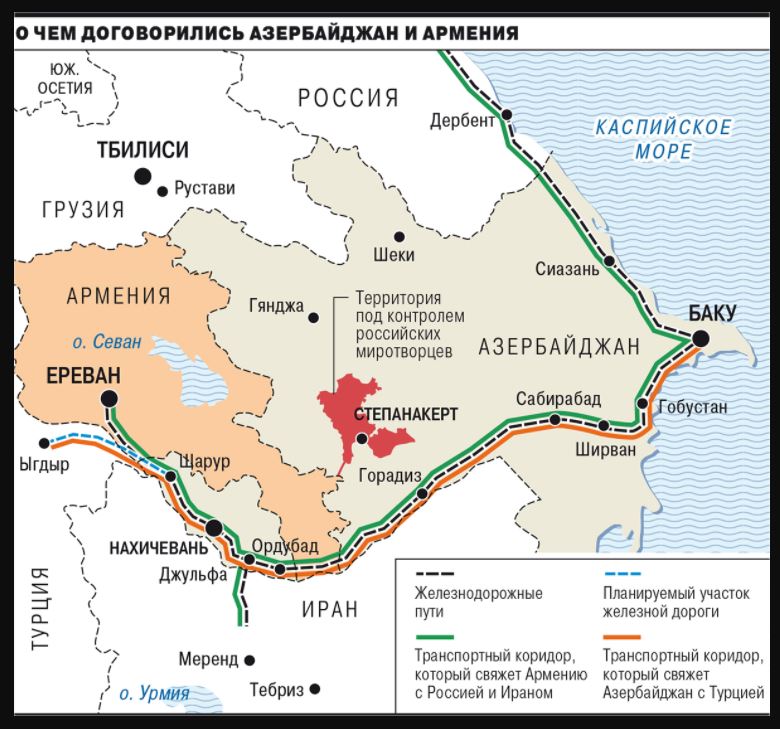 Taking into account that in the above-mentioned context the interest in the Armenian railway network has increased, the Union of Informed Citizens decided to study the non-functioning or dismantled parts of the railway network in the territory of Armenia.

The first railway in the present-day territory of Armenia was operated during the tsarist period, in 1899, when the administrative center of the Caucasus, Tbilissi (Georgia) and Alexandropol – the present-day Gyumri were connected (it passes through present-day Vanadzor).

The railway network of Armenia was significantly expanded and electrified during the Soviet period, especially in the post-war years. As of 1985, Soviet Armenia had a 760 km general-purpose railway.

Today, according to the latest data provided by the South Caucasus Railway Company, which operates the Armenian railway network, the total length of Armenian railway lines is about 1250 km, of which 760 km are the main roads. Today the company operates about 690 km of the railway. 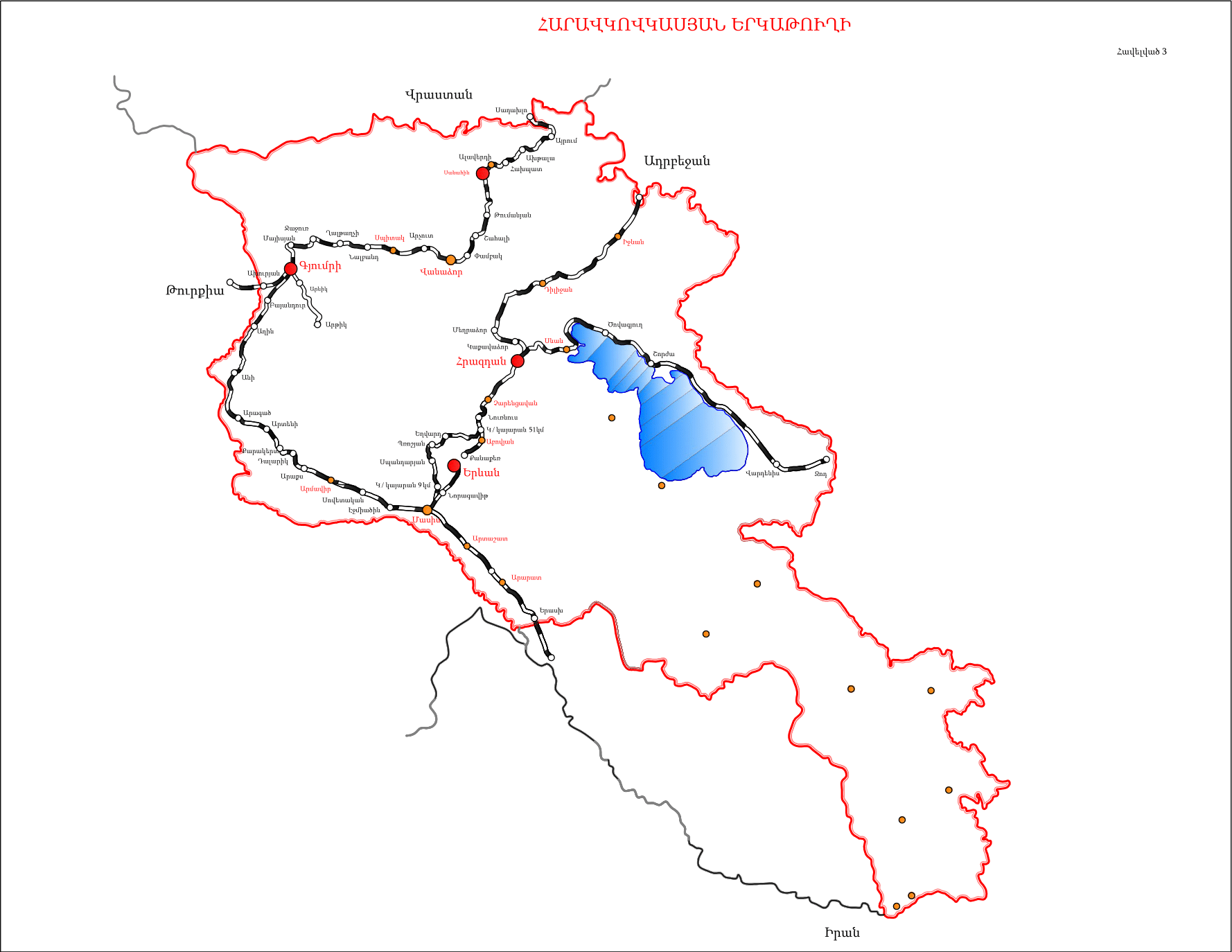 Map of the railways of “South Caucasus Railway” CJSC

Unused, abandoned and dismantled sections of the railway

After the collapse of the Soviet Union, the Armenian railway network came under de facto blockade due to decades of complete blockade by Azerbaijan and Turkey. During the last three decades, most of the railways in Armenia have either been abandoned or, in some cases, dismantled.

According to the data provided by the South Caucasus Railway CJSC, there are three non-operated sections in the Armenian railway network:

The Yeraskh section, which was part of the Yerevan-Baku railway, has not been operating for more than 30 years due to the Armenian-Azerbaijani clashes during the Artsakh conflict.

Since then, a de facto line of contact has been established between Armenia and Nakhichevan, and the railway has been suspended.

Today, the 4 km section from Yeraskh to Sadarak settlement in Nakhichevan has been completely dismantled. Several hundred meters of this section is in the territory of Armenia.

The 13 km section of the state border from Gyumri to Turkey has actually been abandoned for about 30 years.

The last train passed through here in 1993, when Turkey finally closed the border with Armenia.

According to a study, at least 0.7 km of that section has been dismantled.

The section connecting Dilijan to the state border of Azerbaijan through Ijevan, which opened in the early 1980s, is completely abandoned. This section was part of the alternative Yerevan-Baku route.

After Ijevan, the railway continued to the Aghstafa region of Azerbaijan, reaching Baku via the Kirovabad-Yevlakh road.

The last train passed here in 1992. The section has been destroyed or looted in some places.

In the area of Haghartsin village, for example, a part of the railway was destroyed due to a landslide, and the electric wires of the railway and other items were dismantled.

In 2020, the police reported that a citizen had dismantled and stolen 18 wooden supports of railway rails.

According to an article published in “Aravot” daily in 2016, “at present, not only the railway wires, but also electric poles, station and semi-station buildings have been looted.” The remains of Ijevan railway station have recently been covered by Civilnet.

About 40 km of the Armenian section of the Yerevan-Baku railway passing through Meghri has been completely dismantled.

The last train through Meghri passed in April 1992. Journalist Tatul Hakobyan, visiting Meghri in 2016, wrote: “There is nothing left of the 40-kilometer railway. The iron rails and the whole engineering system simply do not exist.”

Meanwhile, Factor.am journalist Robert Ananyan, visiting the place this January, mentioned that the rails of the Meghri railway have been dismantled, and the buildings and tunnels are half-destroyed. According to former MP Davit Matevosyan, who was from the Meghri region, the Meghri railway began to be dismantled during Robert Kocharyan’s tenure in 2003.

According to the investigation published by the press service of the Public Television, it was dismantled by the order of the Ministry of Defense, in 2003, when Serzh Sargsyan was the Minister. It was sold to the Zangezur Copper and Molybdenum Combine.

In October 2018, the Investigative Committee issued a statement stating that according to the preliminary investigation, the Kapan-Meghri section, having been handed over to the South Caucasus Railway CJSC under a concession agreement in 2008, was “completely dismantled and stolen” in 2010-2011.

Instead of the former railway (the place of the removed rails and supports) the soil road leading from Meghri to the village of Nrnadzor to the east now passes.

Other parts of the Armenian railway network are not fully operating. The most significant of them is the Hrazdan-Fioletovo-Dilijan section. Although according to the information posted on the website of the South Caucasus Railway CJSC, the Dilijan station is in operatimg, while the Hrazdan-Dilijan section is not operating.

Thus, a significant part of the Armenian railway network, the sections of the border with Hrazdan-Ijevan-Azerbaijan and Gyumri-Turkey, is now abandoned, and the Meghri section of the Yerevan-Baku railway is completely dismantled.

According to the data provided by Apaven Company, the renovation (or rather construction) of the Meghri section of the railway will cost $ 250 million, that of Ijevan- $ 450 million, Akhuryan- $ 16 million, and Yeraskh- $ 5 million. The working group headed by the Deputy Prime Ministers of Armenia, Russia and Azerbaijan has not yet discussed the distribution of railway rehabilitation costs.

Most likely, the repair of only the Meghri and Yeraskh railway sections is being discussed, as the repair of the Hrazdan-Ijevan-Azerbaijan railway is very expensive (due to the length of the abandoned section and the 8-kilometer tunnel).

And the operation of the Akhuryan railway is conditioned by the opening of the Armenian-Turkish border, which does not seem to be planned in the foreseeable future.