As it is known, Armenian state bodies are reluctant to release figures related to the personnel and the technical resources of the RA Armed Forces. For that reason, “Union of Informed Citizens” NGO has decided to publish some not classified information related to the number of the armed forces of Armenia, Artsakh (Nagorno Karabakh) and Azerbaijan, which the RA Ministry of Defense refuses to publish.

Armenia is a member of the CFE Treaty, under which states are obliged to submit reports related to the number and distribution of conventional arms (both personnel and technical resources).
Based on the proposal by the Armenian Ministry of Defense, we have examined the 2016 report prepared based on the CFE member countries’ reports, which we have used to compile the information below (all data as of the beginning of 2016).

Number: According to the report, the overall number of Armenian servicemen is 44.800, 41.850 out of which are ground forces (the rest serve in the air force and air defense). The total number of recruits in the ground forces is 18.950.

In the report on Nagorno Karabakh, the numbers are not completely unambiguous since NKR is not a member of CFE and, hence, is not accountable to it. Nevertheless, according to the report, the number of the armed forces of Nagorno Karabakh is between 18 and 20 thousand.

However, the report assumes and we do not rule out that part of the armed forces personnel and equipment may be included in the numbers presented for the Armenian armed forces. This is also confirmed by the circumstance that during the 2015 constitutional referendum, there were only around 15.000 people in part of the lists of voters carrying out the compulsory military service and the contractual servicemen. Meanwhile, that list should have included around 19 thousand voters doing compulsory military service and about 5 thousand contractual servicemen. Hence, we can conclude that part of the mentioned 42 thousand servicemen were in Nagorno Karabakh or served there (Armed Forces of NKR).

Another 4300 servicemen serve in the RA Police and in the border troops.

Number: According to the report, the total number of servicemen in the armed forces of Azerbaijan is 66.950, 56.850 out of which are ground forces, 7.900 are the air force and air defense forces and 2.200 serve in the navy.

There are 5.000 servicemen in the border troops (including coastal troops) of Azerbaijan. Furthermore, the police forces have about 10.000 personnel. 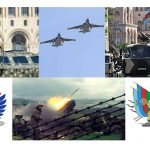 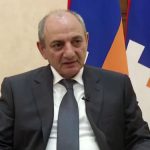 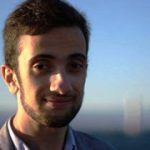