During 2016, the RA external debt increased by about half a billion USD. The largest  approved by the RA Government during 2016 are given below:

In parallel, the RA Government also obtained loan funds from foreign countries, the share of which formed 15% in the RA external debt structure at the end of 2016. Armenia’s largest creditor country is Japan, which accounts for 7.1% of the RA external debt. Among large creditor countries are Germany (3%), France (2.4%), Russian Federation (1.5%), as well as the United States of America (0.6%). 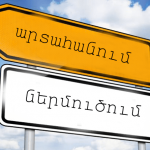