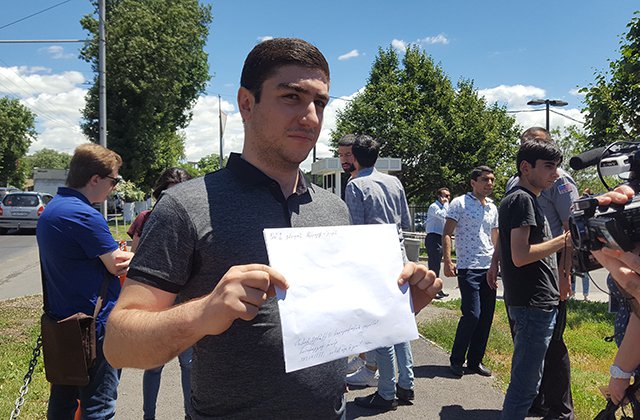 As it is known, some Armenian and Russian media outlets, as well as some activists, have addressed the activity of reference laboratories opened in Yerevan, Gyumri, and Ijevan in 2016 and funded by the “Threat Reduction Agency” of the US Department of Defense, claiming that the laboratories have dual function and pose a danger for the “population of Armenia, which is a strategic ally of Russia”, as they may create biological weapons.

These allegations have been denied by all relevant authorities, namely, the RA Ministry of Health, the US Embassy in Yerevan, and etc.

And though the false nature of this information has been proved multiple times, some groups continue to spread the disinformation about the biological weapons created in Armenia by the US.

Yesterday three people from the aforementioned groups even organized a protest near the US Embassy in Yerevan. The protest was widely covered by the media in spite of the fact that a number of absurd ideas were expressed there (for instance, the claim that the US has founded such laboratories in 400 countries of the world).

In particular, we discovered that the authors of the publications about “US biological weapons in Armenia” are pro-Russian groups, which spread the disinformation either through Russian or pro-Russian websites. Moreover, the most active role-players have connections with the Russian Embassy in Armenia or Russian funds in this way or other.

Hence, based on the facts introduced in the report, we can state that the main aim of the aforementioned disinformation is to represent USA as an “enemy” and “danger” to Armenia, and create and reinforce an image of Russia as the guarantor of our security and our “rescuer”.

You can find the full report here.