A crime boss applied to Roskomnadzor against «Union of Informed Citizens» 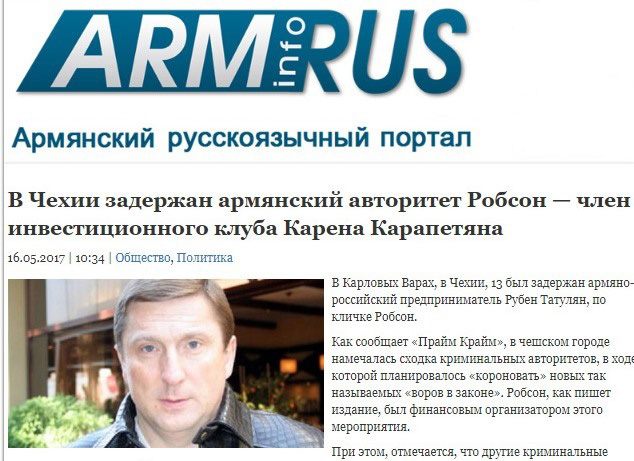 Today, on September 1, Union of Informed Citizens received a letter from the Federal Service for Supervision of Communications, Information Technology, and Mass Media of the Russian Federation (Roskomnadzor).

By means of the letter the RF state body demands to remove the material on the arrest of Ruben Tatulyan, a member of Armenian investment club (in the criminal world known as Robson), in the Czech Republic from the news website ArmRus.info belonging to Union of Informed Citizens (http://armrus.info/archives/29039). In the letter composed in English with many mistakes Roskomnadzor substantiates its claim with the provisions of the Russian Federation Law on personal data.

It is of more concern, however, that a person holding diplomatic passport of the Republic of Armenia who is also a member of the “investors club” established by Prime Minister Karen Karapetyan applies to a foreign state body in order to exert pressure on mass media in Armenia.

Meanwhile, Agency for the Protection of Personal Data is functioning at the Ministry of Justice of the Republic of Armenia, and decisions of the agency are mandatory for the Union of Informed Citizens too. If Ruben Tatulyan’s right to confidentiality of personal data was indeed violated, it could be restored through the mentioned agency.

Union of Informed Citizens will not comply with the demands of Roskomnadzor based on the legislation of the Russian Federation because it acted within the limits of Armenian legislation and Russian legislation is not applied on the territory of Armenia.

Moreover, now ArmRus.info and SUT.am websites operating within our team will explore with more interest how the representative of criminal world received RA diplomatic passport and appeared in Prime Minister’s ”investors club”.