Today Union of Informed Citizens NGO held a public discussion entitled “Advantages and disadvantages of Armenia’s membership to EAEU”. Representatives of parliamentary factions, experts in the field, representatives of non-governmental organizations, mass media and about 80 students participated in the discussion.

Deputy speaker of the National Assembly, Mikayel Melkumyan from the Tsarukyan faction, secretary of Yelq faction Gevorg Gorgisyan, secretary of the Republican Party Gagik Melikyan, as well as programs coordinator of the Union of Informed Citizens Daniel Ioannisyan, Chairman of the Republican Union of Employers of Armenia Gagik Makaryan and Member of the Eurasian expert club Ashot Tevikyan made speeches.

Touching upon the draft decision of Yelq fraction on termination of Armenia’s membership to EAEU Mikayel Melkumyan from Tsarukyan bloc noticed that the issue contains risks that should be discussed before starting the process. In his speech Gevorg Gorgisian from Yelq elaborated in details the damage caused to Armenian economy by joining EAEU emphasizing that the structure not only impedes development of Armenia’s economy but also questions sovereignty of the state. RPA member Gagik Melikyan opposed his partner noting that on September 3, 2013 Republic of Armenia, taking into account all the difficulties and demonstrating a will to make a sovereign and right decision, chose the way to integrate into the EAEU, what is the only right way.

Experts, active young people and students took part in the questions and answers session and exchange of opinions about the speeches. 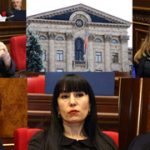 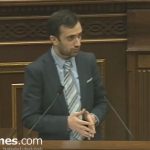 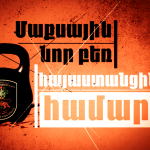