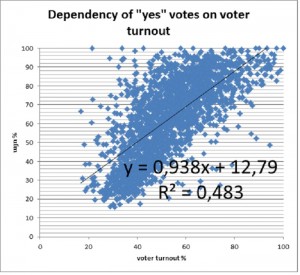 Some opponents of this methodology claim that the active participation is related to the fact that the “yes” proponents were more eager to go to the polling stations and vote. However, we do not observe such tendencies in Switzerland, where referendums are held most frequently.  Below you can find respective graphs of elections in different countries. They are aimed at statistical revelation of election fraud. Our graph is similar to those of Uganda and Russia. 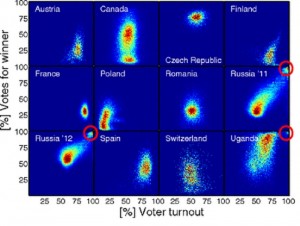 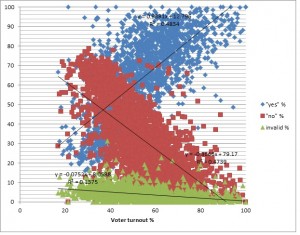 The concept of normal distribution in statistics. Normal or Gaussian distribution represents such a distribution of values in case of which those values are probable (among different values) which are close to the mean of all the values. Moreover, the larger the deviation of the value is from the mean, the smaller the possibility of encountering it. In case of such distribution, we can say that all the values are subject to a common law. Roughly speaking, in our case the distribution will be normal, if 63% “yes” is registered in the largest number of polling stations. In other words, the most probable result should coincide with the average index. The polling stations that registered larger or smaller number of “yes” votes compared to the mean (63%) should be smaller in number. Moreover, the larger the difference from the mean, the smaller the probability should be. If distribution is not normal, it is assumed that the principle of randomness has been violated. In our particular case, the latter means that voting irregularities (election fraud) have occurred. There are tests that allow us to check the normality of distribution. Those are Kolmogorov-Smirnov, D’Agostino-Pierson and Shapiro-Wilkie tests. In our case, all the test results indicate that the distribution is not normal. It is worth mentioning that there are numerous precedents of checking the presence of election fraud in this specific way. Particularly, normal distribution is observed in elections in Switzerland and Canada. However, we cannot say the same about elections in Russia.

Thus, the histogram shown in the picture below clearly shows that 80% is the most recurrent one, which can be found in 186 polling stations. 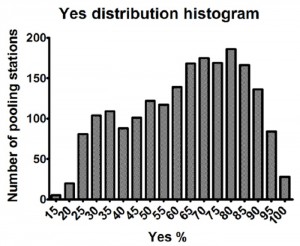 A second peak can also be observed in the histogram – 35%, which has been found in 109 polling stations. Hence, we can assume that we have two peaks, and, consequently, two distributions and two patterns. If we give a very rough assessment, we can speculate that the first pattern -35% expressed the true picture, and the second pattern corresponds to rigged polling stations, where up to 80% was rigged. As a result, the mean value in the republic has resulted to be 63%. 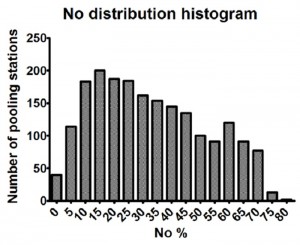 Such “double hump” histograms can be observed in countries where different regions have serious differences. For instance, in Belgium, French-speaking and Flemish-speaking regions are largely different and, hence, such an election outcome is possible. Another example is Spain, where two regions want to secede and, hence, display different tendencies during elections. Nevertheless, all the marzes (regions) of Armenia have the same national, religious, linguistic and social structure. Armenia itself is a unitary state. In other words, there is no border in our country beyond which there are people who have radically different views. Consequently, we can exclude the generation of such “double-peaked” histograms of elections without falsifications.

Such a picture can have only one explanation: in the polling stations where the “yes” proponents have had an opportunity to make an evidently false results protocol (that is, de facto there was no representative of “no” in these polling stations), a few techniques have been used – not only have “no” votes been moved to “yes” votes, but also the ballots of citizens who did not vote were attributed to the “yes” votes. 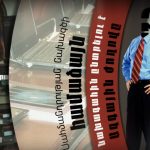