Activity of Armenian diplomats during the 44-day war

According to the information provided by the Ministry of Foreign Affairs of the Republic of Armenia, a total of 103 interviews were published during that period, of which 67 were monitored by our organization. The remaining 36 interviews and publications could not be monitored because either they were not published on the Internet or were published only in other languages.

The conclusions presented below were based on the monitoring of 67 interviews and publications.

Thus, in the period from September 27 to November 18, several main provisions were put forward in the interviews of the diplomatic representatives of Armenia, the directions and targets of which changed along with the change of the war situation.

In particular, at the beginning of the war, the representatives of Armenian embassies in other countries mentioned in their interviews that there was no military solution to the Karabakh conflict, the only way to resolve it was through peaceful means, the war violated international humanitarian law, Azerbaijan was an aggressor, and etc.

With time, the provisions put forward by Armenian diplomats became more systematic and clear, and the statement on Turkey’s intervention in the conflict was made, which is actively drawn to in the interviews given by the Armenian ambassadors.

In the infographic presented below, it is clear that this idea gradually became the most discussed issue by the ambassadors of the Republic of Armenia in other countries. 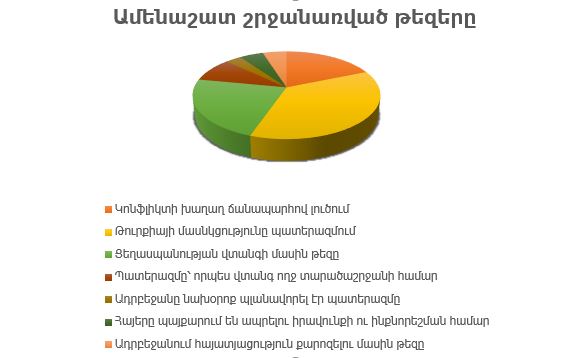 One of the most common provisions at that time was that this war was another attempt at genocide against the Armenian people. It can be noticed that the circulation of the idea increased chronologically. In other words, this was not mentioned at the beginning of the war, but at the end of the war, almost all the representatives of the Republic of Armenia mentioned in their interviews that the war was yet another attempt at genocide against Armenians. Most of all, it was highlighted by the Ambassador of the Republic of Armenia to Italy Tsovinar Hambardzumyan. She spoke about it in all her interviews.

One of the most widely circulated assertions was the one that there was no military solution to the conflict, and the conflict should be settled peacefully within the framework of the OSCE Minsk Group Co-Chairmanship. It was mostly circulated by the representatives of the Republic of Armenia in the United States, Ambassador Varuzhan Nersesyan and Consul Armen Barburdyan.

At the same time, the Armenian diplomats insisted in their interviews that Azerbaijan was never ready to settle the issue peacefully, and that Azerbaijan’s militarism had always indicated that they intended to resolve the issue by force.

In addition, the representatives of Armenia in other countries actively spoke about the fact that the war and the presence of mercenaries in the Caucasus could threaten the security of the region and the European Union, that is why it was necessary to stop the war immediately. This was mostly mentioned by the Ambassador of the Republic of Armenia to Italy Tsovinar Hambardzumyan.

The following provisions were also widely circulated during the war:

In conclusion, taking into account the results of the monitoring, we can state that a number of ambassadors actively worked with the media and tried to contribute to the dissemination of the messages of the Ministry of Foreign Affairs of the Republic of Armenia through their interviews. However, there were also ambassadors who gave only one interview during the whole war.

In addition, it should be noted that there were also ambassadors who actively worked with the media, but did not address or spoke little about the issues discussed in this article. For example, in his interviews during the war, the already former Ambassador of the Republic of Armenia to the Baltic States Tigran Mkrtchyan emphasized the right of the people living in Artsakh to self-determination, and noted that Azerbaijan was targeting the civilian population.

In his interviews, the Ambassador of the Republic of Armenia to Romania Sergey Minasyan emphasized the circumstance that Artsakh historically belonged to the Armenians, spoke about the neutrality of the Russian Federation in the war, as well as the need to hold direct talks between Artsakh and Azerbaijan.

In the table below you can see in more detail how many interviews the representative of the Republic of Armenia gave in the period from September 26 to November 18. 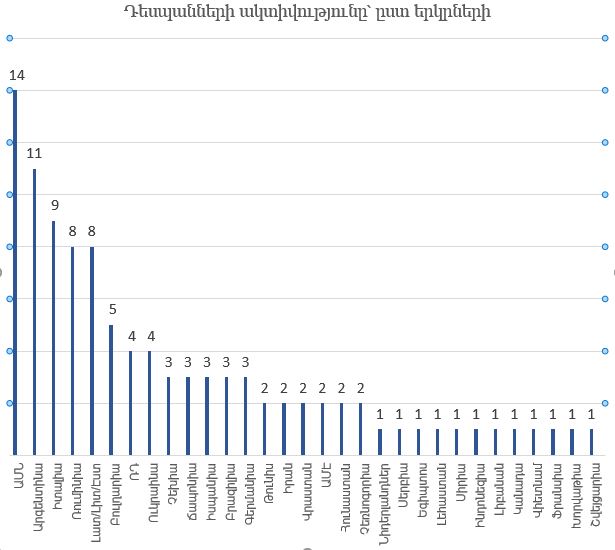 Number of interviews given by ambassadors of the Republic of Armenia to other countries during the war.