Call for the withdrawal of troops, condemnation of the targeting of settlements. the stance of the countries in the UN Security Council

On September 15, 2022, the UN Security Council held an urgent meeting, under the presidency of France, based on Armenia’s request to discuss the military aggression unleashed by Azerbaijan against the territorial integrity of the Republic of Armenia.

The permanent representatives of Armenia and Azerbaijan to the UN also participated in the session.

The session opened with a speech of Miroslav Jenča, the Assistant Secretary-General for Europe, Central Asia and Americas, in which he summarized the positions of both sides:

“Since 2020, this has been the biggest conflict between Armenia and Azerbaijan, which means that the process of regulating relations between the two countries faces serious obstacles.”

Jenča also emphasized that the UN “is not authorized to verify or confirm the statements of either the Armenian or Azerbaijani side” regarding the escalation.

The Union of Informed Citizens summarized the particularly significant speeches of the representatives of the permanent and non-permanent member states of the Security Council during the session and put together the important theses.

“Armenian settlements and civilians were targeted”

Ambassador Richard Mills, the representative of the United States, a permanent member of the UN Security Council, expressed concern about Azerbaijan’s targeting of civilian infrastructure and civilians in Armenia. He called to respect the international humanitarian law, including the one ensuring the safety of the civilian population.

“Washington is deeply concerned about reports that civilians have been injured in the territory of Armenia,” Mills said.

Nicolas de Riviere, the French ambassador to the United Nations, also emphasized that the armed forces of Azerbaijan targeted a number of Armenian settlements and civilian infrastructures.

Mona Juul, representative of Norway, a non-permanent member of the UN Security Council, expressing concern about reports of military operations between Armenia and Azerbaijan, also emphasized that citizens and civilian infrastructures were shelled on the territory of Armenia.

Kate Moran, the representative of Ireland, the non-permanent member state of the Security Council, said that her country is “concerned by reports of serious fighting on the border of Armenia and Azerbaijan, as well as of the reports of attacks on important civilian infrastructure in the territory of Armenia, which is prohibited by international humanitarian law.”

Ruchira Kamboj, the representative of India, a non-permanent member state of the Security Council, indirectly called Azerbaijan an “aggressor” calling on the latter to “immediately stop confrontations and show restraint”.

“Recent reports of strikes along the Armenian border, including strikes targeting the civilian population, are worrisome. The UN Security Council cannot remain silent and allow the situation to worsen,” she said.

The representative of Russia to the United Nations, Vassily Nebenzya, spoke about the casualties among civilians, however without specifying a concrete party or mentioning that the casualties were from the Armenian side.

“Withdraw troops to their initial positions”

Emphasizing the principle of territorial integrity, four of the five permanent member states of the UN Security Council – the USA, Great Britain, France and Russia – have announced the need to return the troops to their initial positions.

Great Britain, a permanent member of the Security Council, emphasized that there is no military solution to the conflict, and “the troops must return to their previously occupied positions.” Similar calls were made by the representatives of the USA and Russia.

The representative of France made a more direct statement in this regard, calling on Azerbaijan to withdraw its troops from the territory of Armenia.

First of all, we attach great importance to the maintenance of the ceasefire declared on November 9, 2020, secondly, we call on Azerbaijan to take steps so that its own armed forces turn to their initial positions,” mentioned the French diplomat.

Unlike the United States and Great Britain, which made unaddressed calls to return the troops to their initial positions, the Russian representative to the United Nations put a sign of equality, calling on both Armenia and Azerbaijan to withdraw their troops.

China was the only one of the permanent members of the Security Council, representative of which did not address the issue of returning the troops to their initial positions.

“Border disputes should be resolved by demarcation.” The thesis of Moscow and Baku

In his speech, the Russian ambassador called on both Armenia and Azerbaijan equally to exercise restraint, urging them to ease the tension on the Armenian-Azerbaijani border.

Unlike a number of permanent and non-permanent member states of the UN Security Council, the strategic ally of Armenia has never stated the Azerbaijani invasion of the sovereign territory of the Republic of Armenia.

Instead, the Russian ambassador insisted that all issues should be settled in the spirit of the statements of November 9, 2020 and January 11, 2021, signed with the mediation of the Russian Federation.

“As for the border disputes between Armenia and Azerbaijan, they should be resolved within the scope of the actions of the bilateral demarcation commission, in consultation with the Russian Federation,” said the Russian diplomat.

Yashar Aliyev, Ambassador of Azerbaijan to the United Nations, in his speech, among other baseless accusations against the Republic of Armenia, claimed that RA “failed” the process of demarcation and delimitation.

“The Armenian side has made demarcation and delimitation impossible. And if that process had taken place on time, there would have not been any military escalation,” the Azerbaijani ambassador said.

The issue of Nagorno Karabakh in the speeches

The representative of China at the UN, Zhang Ju, first expressed his concern over the military escalation on the Armenian-Azerbaijani border, then linked this tension with the Artsakh issue.

“It is impossible to separate the normalization of relations between Armenia and Azerbaijan from the settlement of the Nagorno Karabakh issue. We have information about the historical development of the problem, and our position remains unchanged: we see the settlement of differences only through political dialogue,”- said the representative of China.

The representative of Ireland also touched upon the Artsakh issue in her speech, noting that her country is “faithful to the efforts of the EU aimed at dialogue, as well as a stable and comprehensive solution to the conflict, in particular, the definition of the permanent status of Nagorno Karabakh”. 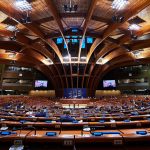