The Freedom House and the press freedom in Armenia

“Guiding lights in the darkness”

The report records tendency to limit press freedom throughout the world, but alongside these negative trends, Freedom House has recorded positive changes in five countries of the world. These countries are presented under the subheading “Guiding lights in the darkness”. These are Ethiopia, Malaysia, Ecuador, Gambia and Armenia. Nevertheless, as noted in the report, Armenia has not improved its press freedom score compared to 2017. According to the report, this positive change underscores once again the close relationship between media freedom and other political freedoms. When antidemocratic authorities rule the country, the press freedom is limited, while a reformist leadership is defined in part by its willingness to accept criticism from a free press.

“The media and democracy”

In the section titled “The media and democracy”, the report touches upon the role of the media during the revolution in Armenia. According to Freedom House, though most television channels initially avoided covering the mass demonstrations, a small contingent of independent outlets, including Civilnet and Azatutyun, was able to provide steady in-depth reporting, including live streams and skillful use of social media. The section of the report referring to social media provides a positive assessment of the use of Facebook Live and other live-streaming services to challenge the government’s claims on the size or goal of antigovernment protests, and to document security forces’ often heavy-handed response.

Armenia and other countries 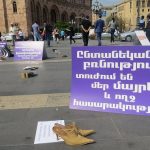