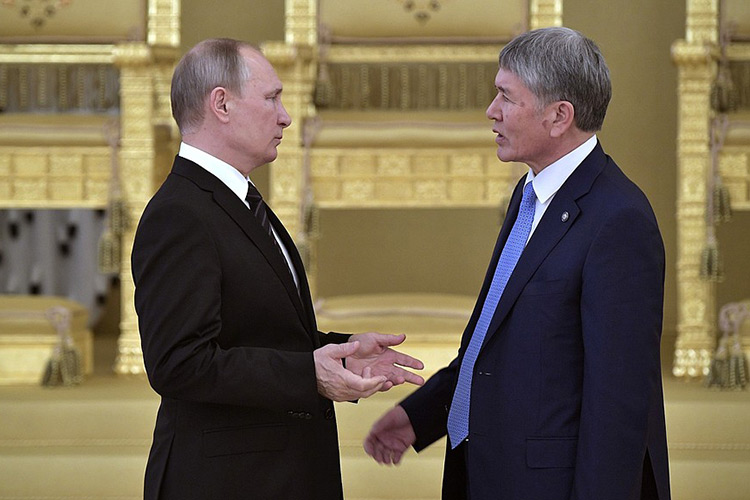 As a result of tense domestic political situation in Kyrgyzstan Russia has appeared in an interesting position that could further increase Moscow’s influence on political events in the Eurasian territory.

A series of prosecutions against a number of high officials of the former regime, including former Prime Ministers and former Prosecutor General, were launched under the President Sooronbay Jeenbekov elected in the fall of 2017. In June 2019 the country’s Parliament approved the draft to deprive former President Almazbek Atambayev of immunity. Atambayev, a former political teammate of incumbent President Jeenbekov, is accused of a series of scandalous corruption cases but refuses to appear upon the demands of law enforcement for interrogation. After accusing Atambayev, his supporters were guarding his house blocking the road leading to the former President’s house with concrete barricades and declaring they would not allow him to be arrested. Atambayev himself does not accept the charges against him and declares that he is innocent before the law.

In the midst of internal political confrontations Almazbek Atambayev leaves for Moscow for a two-day visit on July 23 where he meets with RF President Vladimir Putin.

By going to Moscow on a Russian airplane from the Russian military base in the territory of his own country the former President of Kyrgyzstan, as a matter of fact, made a clear offer to RF to interfere in Kyrgiziastan’s internal affairs.

It shall be noted, however, that this step from Atambaye’s side was, to put it mildly, not really welcomed in Moscow and after the meeting RF President Vladimir Putin made quite a cold announcement.  In particular, Putin noted that Kyrgyzstan has undergone quite a big amount of domestic shocks and it is in the country’s best interests to establish stability. According to Putin, Russia intends to continue all programs with Kyrgyzstan in cooperation with the present authorities. RF President also called on the Kyrgyz people to unite around the incumbent President Sooronbay Jeenbekov.

Thus Russia actually refused Atambayev’s “offer” to interfere in Kyrgyzstan’s internal affairs although mere meeting between Putin and Atambayev was itself a big interference in the domestic affairs of this Middle East country.

Upon return to Kyrgyzstan Almazbek Atambayev stated that he did not ask anything from Putin, but at the same time he was not going to be interrogated by law enforcement.

Kyrgyz authorities, on their part, are still not taking steps to detain Atambayev. At any rate, no matter how the events continue to unfold in Kyrgyzstan it is obvious that Atambayev’s team will not receive any support from Russia which is undoubtedly one of the most important power centers in the region.  Atambayev’s team will not be able to receive support from other countries, particularly from the USA and China pursuing their interests in the region. Present authorities in Kyrgyzistan led by Jeenbekov are successfully collaborating both with Washington and Beijing and none of them want instability in Kyrgyzstan.

Thus, Atambayev’s visit to Moscow and attempt to receive support can be considered a total failure. Moreover, Atambayev damaged the reputation of his country and demonstrated Russia’s dominance in Kyrgyzstan.

In addition, what happened was also important in terms of setting a precedent. In fact, this is a unique case where EAEU and CSTO member state addresses Russia to resolve an internal political issue. This can be used by Russia in future in case it interferes in domestic political affairs in other countries.