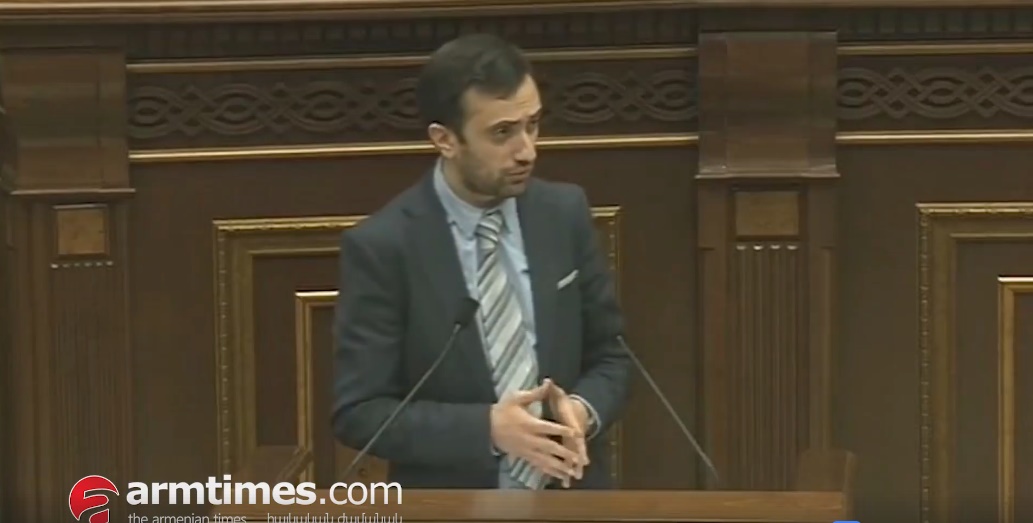 On November 27, parliamentary hearings were held at the RA National Assembly regarding the Draft on “Starting the Process of Terminating the Eurasian Economic Union Agreement on the part of Armenia” authored by “Yelq” parliamentary faction. Daniel Ioannisyan made a speech at the hearings as an invited expert.

“Dear guests, I will try to concentrate on the economic figures.

76% of EAEU customs rates are different than the rates deriving from the interests of Armenia defined by the legislative body under Article 102 of the Customs Code. This means that customs duties for ¾ of commodity types are beneficial for the EAEU, and particularly Russia, rather than for Armenia.
In particular, there is a decrease in customs tariffs for 1700 commodity types, and an increase for 6300 commodity types. Additionally, prices for about 700 crucial commodity types will increase during the coming years. And many of these commodities do not have competitive and high quality analogues in the EAEU. Thus, the price increase for consumers is inevitable.

And while it was stated that there will be import reorientation of a number of commodities towards the EAEU goods, numbers show the opposite, and the share of goods imported from the EAEU has declined. Thus, the share of commodities imported with high tariffs is increasing year by year, resulting in a very serious inflation.

We have only 25% of our foreign trade with EAEU member countries. And the remaining 75% of foreign trade can suffer due to expected changes of conditions of our membership in the World Trade Organization (WTO), and higher customs tariffs for imports will be introduced, with the resulting negative consequences.

If Armenia continues its membership in the EAEU, starting from 2020, the residents will pay 1.6-2.2 EUR for each square centimeter for the customs clearance of vehicles older than 7 years old.
This means that, for instance, the customs clearance for the 1.6-liter engine Opel will cost 2500 EUR, and that of 2 liter engine vehicles will cost 4400 EUR without VAT.
On average, cars in Armenia are 20 years old. About 90 percent of the population cannot afford buying a car younger than 7 years old. Currently, the customs clearance for cars available for that category of the population costs about 1000 EUR including VAT and the environmental tax. In two years, if Armenia continues its membership in the EAEU, it will reach 3500 to 6000 EUR, including VAT.
Yes, the cost of customs clearance for new cars will increase by 10% only (of course if we can call it “only”). However, only a very small part of the population of Armenia can afford to buy new cars.
Moreover, taking into account the circumstance that pubic authorities procure a significant number of cars, the 10 percent increase in the price for new cars will also be a significant burden on the state budget.

According to the EAEU agreement, sooner or later we are going to synchronize our monetary policy… However, the Armenian dram is much more stable than the Russian ruble. Hence, the synchronization of the monetary policy will lead to negative consequences.
For a country with a small economy like Armenia, the national currency rate is extremely important.  ¾ of our foreign trade is outside the EAEU borders. And if there are sharp currency rate fluctuations compared to that of our main trade partner countries, it will have a very negative impact on the economy.

There are no principal changes in trade turnover with EAEU member countries, and there will be none if we leave the EAEU since it is a long time we have had the CIS free trade agreement with those countries, and we already work together with zero customs duties.
Opponents will say that not less important are the non-tariff regulations, which should not exist within the customs unions. It is worth noting here that according to the Eurasian Development Bank, currently there are 200-450 non-tariff restrictions between EAEU member countries, and these have an effect equivalent to customs duties reaching 30%.
This means that non-tariff restrictions are not only existent, but are also a heavier load for the business than the average statistical customs duty.
Moreover, talking about restrictions, I am not even reminding that Armenia has neither sea, nor railway connection with the EAEU. And the only automobile road, Upper Lars, is closed for several months a year. As a result, our economy is dependent on the weather conditions in the Georgian mountains.

According to Article 35 of the EAEU agreement, Armenia cannot independently sign free trade agreements with third parties. For that reason, it was not possible to sign the agreement with the EU in 2013. And naturally, no free trade regime is envisaged by the agreement signed on Friday. Note that the economy of the European Union is 40 times larger than that of the EAEU. Our exports potential to the EAEU is almost fully realized, while there is a lot of opportunity for growth in exports to the European Union, particularly, in the fields of processed goods and food. Perhaps there is no need to mention that in the long term, Russia’s oil-producing economy is a sinking ship we need to stay away from.

Perhaps the only positive aspect of the EAEU is that thanks to the agreement, our migrant workers do not need a work permit in Russia. But in the long term, it would be preferable that the Armenian workforce either stayed in Armenia or went to work to countries where the salaries are more decent and labor rights are respected. The Russian monopoly on the labor migration is also problematic from the perspective of Yerevan’s independence from Moscow.

We often purchase weapons and ammunition from countries that are not members of the EAEU. However, weapons imported from third countries will be cleared with the 18-20 percent rate…  And our Ministry of Defense will be paying that customs tax to the EAEU budget.
In fact, this issue is not settled in the EAEU agreement since the defined temporary preferences only refer to the weapons which do not have their analogues in the EAEU, and the period of these preferences expires in 2022.

Tractors, trucks and their spare parts, seeds and fertilizers are mainly imported to Armenia from third countries, and the prices of all of these items have already increased, or are going to increase. This will have negative consequences on agriculture.

Starting from 2020, the customs duties for new buses and their spare parts will also increase by 10 percent. As a result, if we stay in the EAEU, either the cost price for public transport will increase, or we will return to the Russian “Gazel” minibuses.
Moreover, the customs rates for airplanes have increased by 19 percent, which means that we are not likely to have a national air carrier anymore since we will not be able to survive the competition by paying additional 19% for the airplanes.

In case of the association with the EU, there were high-quality studies on its economic effect (for instance, the study conducted by Ecorys). In case of the EAEU, however, so far there has been no such study.
According to the official letter we received from the RA Ministry of Finance, the only study is the article written by Vardan Aramyan in 2015. Leaving aside the circumstance that the article is too old, I should note that at least 3 of its 4 thesis statements are wrong (you can read the details in the SUT.am website).

Thus, according to this article, the EAEU will lead to additional economic growth as a result of elimination of non-tariff restrictions, and the calculation is based on the experience of the European Union. However, the EAEU is not the same as the EU, and there are several hundred non-tariff restrictions here, which have an effect equivalent to customs duties reaching 30%.

According to Aramyan, the next element of positive economic effect expected from EAEU membership is the elimination of customs duties for export of gas from Russia. However, it is not correct to relate decline in gas price to EAEU membership. It is an international tendency. And I would like to ask you not to call gas lootինգ a “privilege”.
Moreover, while Mr. Aramyan claims that the economy will suffer only by 0.1% due to increase of customs duties, I should note that the average customs rate will increase by 5.04%, and in contrast to Aramyan’s projections, the EAEU share in imports is decreasing.

Due to lack of time, I did not talk about the level of democracy, good old corruption traditions and propaganda justifying dictatorship.

Thank you for your attention”. 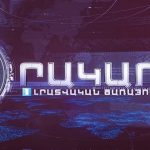 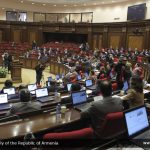